December 9, 2020 (OTTAWA, ON) – As Prime Minister Trudeau prepares to gather with provincial and territorial premiers for their First Ministers’ Meeting tomorrow, the Canadian Federation of Nurses Unions is calling for urgent action to address the long-standing staffing crisis in Canada’s health care system, which only appears to be worsening during the pandemic.

CFNU President, Linda Silas, said, “We are at a critical juncture. Our health care system has long been under immense strain due to underfunding, resulting in critical staffing shortages that put both health care workers and our patients at risk.”

Recent large-scale studies have revealed the troubling status of Canada’s nursing workforce as we entered the first wave of COVID-19, confirming elevated workplace risks to nurses’ mental and physical health and significant potential for turnover.

A separate national study confirmed that nurses suffer from mental illness symptoms at rates much higher than the general population, with nurses citing short-staffing and exposure to workplace violence as their top issues.

“Faced with unacceptable working conditions, an alarming number of nurses intend to leave their jobs. This is a national crisis that demands the immediate attention and action of the federal government, as well as the provinces and territories,” said Silas.

With COVID-19 case numbers rising daily across the country, Canada’s nurses are appealing to the Prime Minister and premiers to tackle this ever-growing crisis by working together to develop a pan-Canadian health human resources strategy that would address these persistent shortages and the harm they cause to both health care workers and patients.

“We’ve relied heavily on nurses during this pandemic, and they’ve worked tirelessly to keep Canadians safe and healthy – without the help they need from their governments. We call on the Prime Minister and Premiers to turn words into action by providing dedicated funding to hire new full-time nurses immediately, and developing long-term solutions to strengthen our health care system,” Silas said. 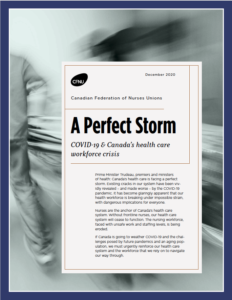