Nurses rally support among premiers to solve the staffing shortage

Council of the Federation

Silas: We have the solutions. It’s time to act on it.

Nurses’ calls for action to end the dire staffing shortage plaguing Canadian health care were heard loud and clear across the country following a successful meeting between premiers and nurse union leaders. Focused on solutions to the health human resources crisis, the meeting took place in Victoria, BC, as premiers gathered for the Council of the Federation on July 11, 2022.

At the breakfast meeting, nurse union leaders from across the country sat with their respective premiers for a frank conversation about nurses’ experiences, working through the staffing crisis and what solutions are needed. The meeting sparked a national conversation on the state of Canada’s health care system and the workers who are holding it together in newspapers, radio and TV across the country. 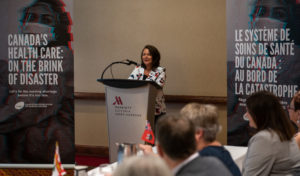 CFNU President Linda Silas opened the discussion on solutions to the nursing shortage.

“We reminded premiers that every day nurses are stepping up and facing untenable working conditions to care for patients across Canada,” said Linda Silas, President of the Canadian Federation of Nurses Unions (CFNU). “Nurses need to see their governments stepping up with concrete actions to retain nurses and create sustainability for them at work.” 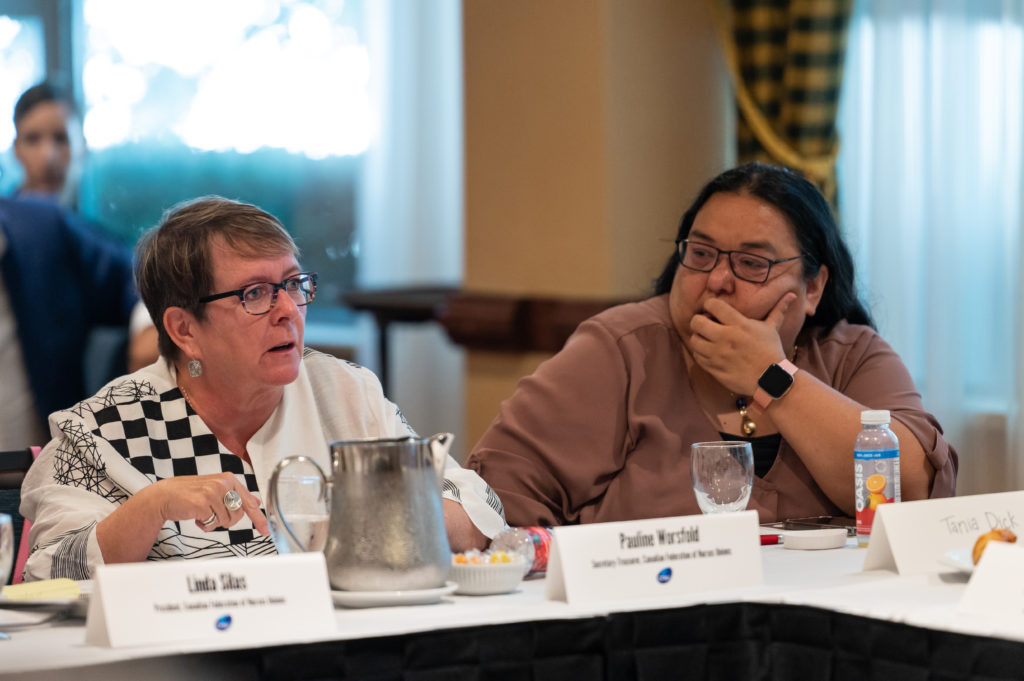 Leaving the meeting, Canada’s nurses and premiers are united on the need for Prime Minister Justin Trudeau and Minister of Finance Chrystia Freeland to call a First Minister’s Meeting focused on urgently addressing the health care staffing crisis.

“This is a Canada-wide crisis that is impacting patient care across the country,” explained Silas. “Collaboration is key here. Nurses need to be at the table with premiers and employers if we’re going to fix this catastrophe.”

At the Council of the Federation, premiers named the health care staffing crisis as the Council’s primary concern as they push to increase the federal health transfer.

While Canada’s nurses and premiers agreed on the need for further federal support, Silas says funding needs to be tied to retaining, recruiting and returning nurses to the public health care system.

“Nurses have been told they’re heroes while their wages are frozen. Banging pots and pans doesn’t pay the bills, it doesn’t give nurses the time off they need and deserve, and it doesn’t ensure safe nurse-to-patient ratios,” says Silas. “Ensuring we have the nurses needed in the public health care system, and that those nurses have the support they need, must be the key deliverable of any additional funding.” 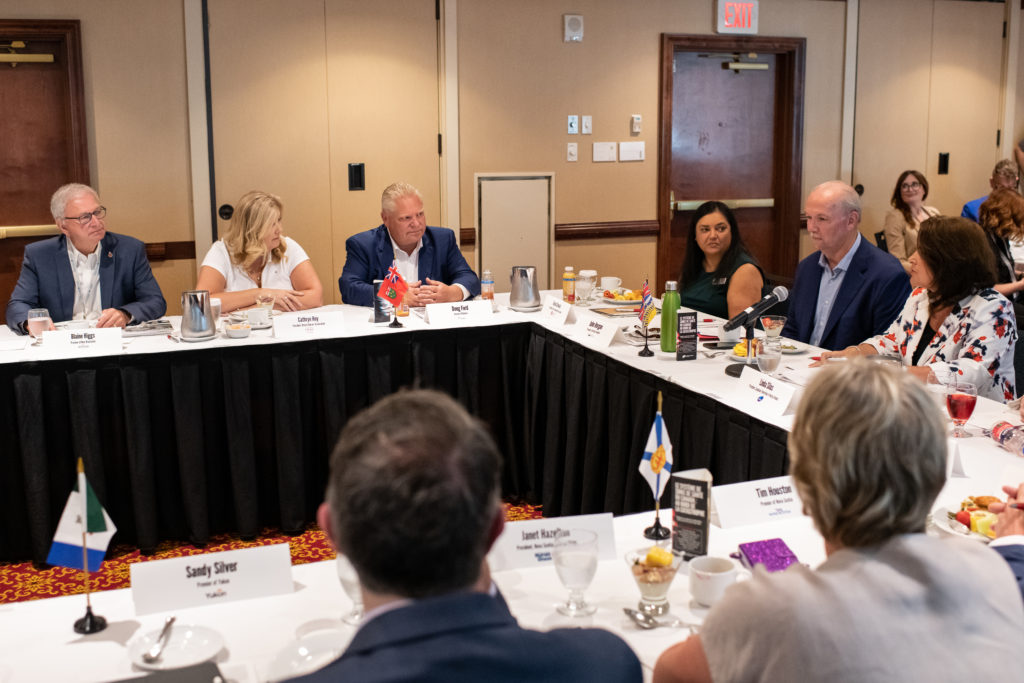 Premier John Horgan, Chair of the Council of the Federation, supported CFNU’s call for a national workforce body to improve decision-making through better data and coordination and build sustainability in the public health system, but emphasized the need for the federal government to step up their role in health care.

To reinforce the urgent need for federal support and collaboration on a pan-Canadian health human resources plan, the CFNU has launched a letter-writing campaign to add public pressure on the Prime Minister and Minister of Finance to work together on solutions.

“Nurses intimately know the importance of teamwork. No one nurse can support all the patients in an ER. And no one province or territory can end this crisis on their own,” explained Silas. “But with the federal government working with provinces, territories and health care workers, we can bring pride back to Canada’s public health care system. We have the solutions. It’s time to act on them.”

CFNU in the News

“We have to fix the workplace in our health-care system right now, it’s an urgent issue,” Linda Silas, President of the Canadian Federation of Nurses Union (CFNU), told CTV’s Your Morning.

“So, the message I’m trying to give to premiers is: I have never, in 30 years of union work, seen nurses so angry. And they’re a tough bunch,” said Silas in the Canadian Press.

In The Globe and Mail, “Silas said provincial commitments to strengthen health care are welcome, but “no one province or territory can solve this on their own,” and federal funding will be key.”

In Global News, Silas said “We are very concerned as health-care workers. What we’re talking now is the survival of our system.”

Featured on CTV News, Silas said “What we’re hearing from our provincial nurses unions is that every day they get a call from nurses wanting to either change their status, going from full-time to part-time, or part-time to casual, so reducing their hours dramatically or completely leaving by retiring early.”

Read, watch, or listen to CFNU’s urgent message to solve the national nursing shortage in the Montreal Gazette, the CBC, CityNews, the Winnipeg Free Press, the Hill Times, Rabble, and The National. 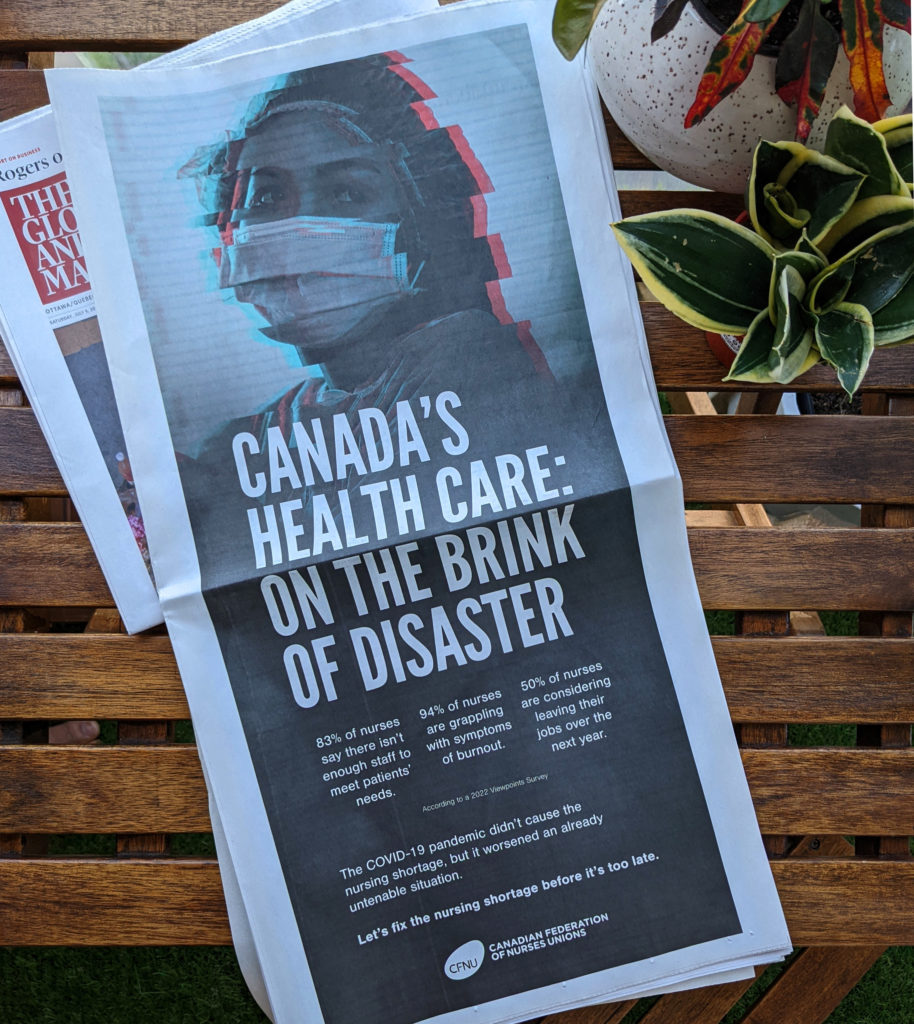 CFNU shared an urgent message in the July 9 edition of The Globe and Mail.