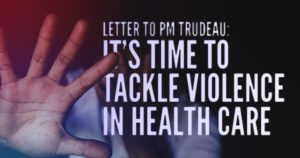 I write on behalf of the Canadian Federation of Nurses Unions (CFNU) to urge your government to take serious and immediate steps to address the rampant workplace violence facing health care workers across the country.

Assaults against nurses and other health care workers are disturbingly commonplace, and the problem has only worsened with the realities of COVID-19.

Recognizing this fact, you recently indicated that your government was ready to move forward with new legislation that would make it a criminal offence to block access to buildings where health care services are provided, as well as threaten or intimidate those that work in those facilities. Canada’s nurses understand that there is more work to be done on this front, and we look forward to collaborating with you to safeguard frontline workers as they do the important work of caring for us and our loved ones.

However, nurses believe that the federal government must go further. Half measures will not be enough to protect health care workers who faced rampant workplace violence long before the onset of the pandemic.

We urge you once again to introduce an amendment to the Criminal Code that would require a court to consider the fact that the victim of an assault is a health care sector worker as an aggravating circumstance for the purposes of sentencing.

This amendment could help deter escalating violence against health care workers by paving the way for offenders to receive stiffer sentences, and it is similar to the existing Criminal Code amendment that addresses violence against public transit operators.

In the last two Parliaments, such an amendment was introduced as a private Member’s bill by both Don Davies (Vancouver—Kingsway) and Todd Doherty (Cariboo—Prince George), but both bills failed to advance beyond the first reading stage.

If your government commits to introduce and enact similar legislation now, it could have the effect of deterring violence against health care workers, as well as sending a clear message to provincial and territorial governments, law enforcement and health care administrators that tackling these unacceptable conditions is going to require a significantly tougher and more concerted approach.

In the CFNU’s view, your government’s planned legislation on harassment and blocking access to health care services goes hand in hand with the Criminal Code amendment to make assault against a health care worker an aggravating circumstance for the purposes of sentencing. The two represent a package of measures designed to support and defend the very workers who care for us all, and we urge you to introduce both amendments at once.

Your commitment to moving forward immediately on both of these essential measures would go a long way to show health care workers that the federal government understands the grave risks they face and is prepared to be a true partner in the effort to ensure their health and safety.

Canada’s nurses look forward to working with the government to bring about safer workplaces for health care workers.