“You’ve got to talk to the people who are affected,” says Métis Senator

Home > Canada Beyond COVID Magazine > “You’ve got to talk to the people who are affected,” says Métis Senator 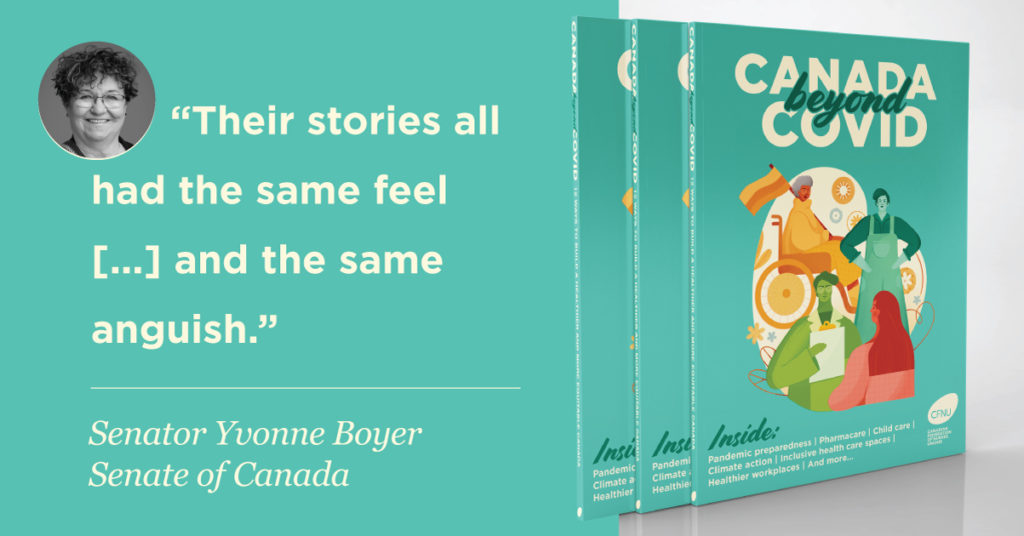 Senator Yvonne Boyer said she was just checking in at a hotel when the woman behind the front desk recognized her as the “senator of sterilization”. The woman, Boyer said, was sterilized without consent when she was just 21, after delivering her fourth child.

Boyer first became engaged with the issue of forced sterilization of Indigenous women in 2014, when she received a call from a reporter in Saskatchewan, inquiring about two Indigenous women who were sterilized against their will.

“I said: ‘Well that’s not right. You can’t do that. You can’t just go sterilize people. That’s a criminal act. That’s battery. That’s assault. Is that medical negligence? What about Aboriginal rights? What about international law? What about the United Nations Declaration on the Rights of Indigenous Peoples?’”

“So, all these legal remedies and issues came to mind.”

The two women were Tracy Bannab and Brenda Pelletier. Boyer said she makes a point of saying their names because she has so much respect for them as the first women to bring this issue to light. After Bannab and Pelletier’s stories were published, more women came forward.

“They were all sterilized in suspiciously the same type of circumstances that the first two had been: it was post-cesarean section, they were Indigenous and they didn’t give consent – or they were coerced into consent or had revoked consent.”

“Their stories all had the same feel […] and the same anguish.”

The Saskatoon Health Region eventually reached out to Boyer and asked her to conduct an external review on the issue of tubal ligation of Indigenous women immediately post-delivery. Indigenous women’s lives, the review found, “were intricately bound within an overriding negative historical context of colonialism.” The Canadian medical establishment’s interest in eugenics, which peaked in the 1930s, was also responsible for the forced sterilization of thousands of people, many of them Indigenous women.

Most of the women interviewed for the review said they did not understand that tubal ligation was permanent and thought it could be reversed in the future.

Boyer’s external review forms the basis of a class action lawsuit currently underway, which now includes about 100 women: ten from Alberta, five from British Columbia, twelve from Manitoba, one from Nunavut, four from Ontario, two from Quebec and 64 from Saskatchewan.

“It’s still happening,” Boyer remarked. “The last ones that were reported were in 2018. I can guarantee, it’s happening at this very moment.”

The senator said there’s a historic power imbalance that allows for this to happen. It’s the same power imbalance that has allowed for anti-Indigenous racism to pervade health care. She’s seen it firsthand; before becoming a lawyer and later a senator, Boyer was a nurse.

“Lots of people were very racist within the health care system,” she recalled. “Probably because of the way I looked, they thought I was very much like them. People would say things to me like: ‘The Indian problem won’t be solved until we sterilize all those women.’”

“You’re talking about my aunties – my sisters,” Boyer thought.

Boyer grew angrier and angrier about the racism she witnessed as a nurse. It’s what led her to pick away at law classes and eventually become a lawyer.

“I thought: ‘I’m either going to do something about it, or I’m going to have to shut up and become complacent.’”

“I generally have never been able to shut up.”

Now a senator, Boyer said her office regularly fields calls from people who have experienced discrimination. Many also reach out to her with issues involving consent.

Recently, the issue of anti-Indigenous racism in health care captured headlines, when Joyce Echaquan, a 37-year-old Atikamekw woman, endured verbal abuse by Quebec hospital staff as she lay dying. In Echaquan’s recording of her last moments in hospital, a nurse can be heard openly denigrating and dehumanizing Echaquan: “She’s only good for sex.”

This isn’t an isolated incident. In a recent report from British Columbia, In Plain Sight, Indigenous people reported widespread and ongoing stereotyping and racism when they accessed health care. About a quarter reported health care workers always assumed they were drunk or engaged in substance abuse, a quarter said they were always treated as though they were dishonest, and about 30 per cent said they did not feel it was safe to speak up when they were treated inappropriately.

Not surprisingly, Indigenous people surveyed also had more trouble accessing health care during the pandemic, compared to the general population; as a result, they were more likely to end up in emergency rooms and in hospital beds. Because Indigenous people face important barriers in obtaining care when they need it, they suffer poorer health outcomes and reduced life expectancy.

These racist attitudes towards Indigenous people are endemic in health care, Boyer said. While decision-makers have called for action, in the wake of Echaquan’s death, Boyer wonders whether this most recent tragedy will lead to meaningful change.

“There’s a lot of handwringing and tears every time something happens,” Boyer remarked.

Sadly, the few concrete actions that follow often aren’t enough to spur meaningful change, she said. And as is all too typical with issues involving Indigenous people, there isn’t enough consultation with the community itself.

“If you’re going to do anything, you’ve got to talk to the people who are affected,” said Boyer. It’s the same advice she gave during a 2021 federal ministers’ meeting on countering anti-Indigenous racism in health care.

There’s been a lot of movement since Echaquan’s death – the most movement Boyer has seen on the issue in a long time, she noted. But the senator worries about the health care sector’s ability to invite and open itself up to transformative change, especially as paternalistic attitudes dominate the conversation and limit Indigenous peoples’ ability to make themselves heard.

“It’s the same thing that’s happened with sterilization: ‘I know you’ve got four kids, and I know you mustn’t want a fifth, so I’m going to fix you.’”

Senator Yvonne Boyer is a member of the Métis Nation of Ontario, with ancestral roots in the Métis Nation-Saskatchewan and the Red River. A former nurse, she has more than 20 years of experience practicing law and publishing extensively on the topics of Indigenous health, and how Aboriginal rights and treaty law intersects on the health of First Nations, Metis and Inuit people. Prior to her appointment to the Senate of Canada, Senator Boyer was the Associate Director for the Centre for Health Law, Policy and Ethics, and a part-time professor in the Faculty of Law at the University of Ottawa, where she also completed her doctorate in laws.