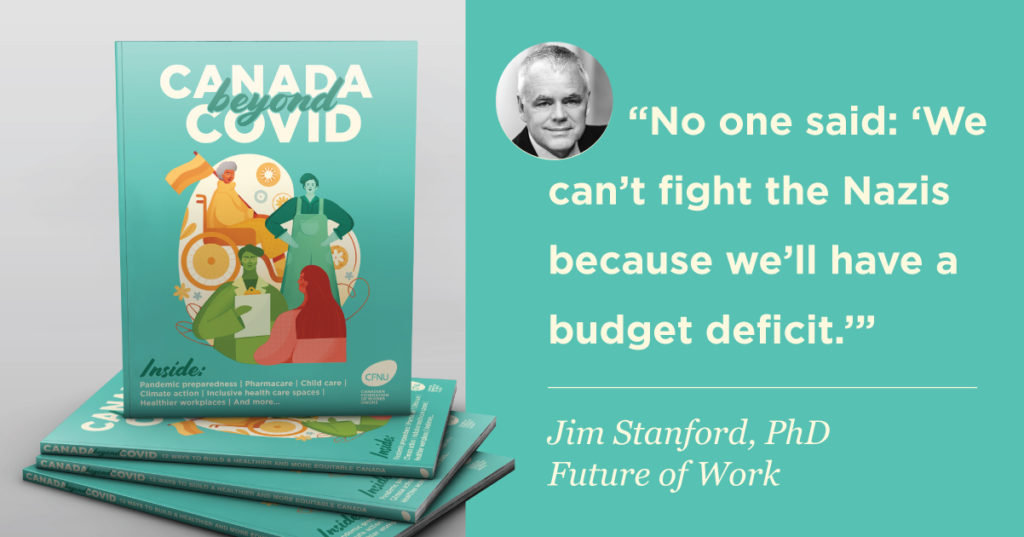 “No one said: ‘We can’t fight the Nazis because we’ll have a budget deficit.’”

Canada entered World War II still ravaged by the economic shock of the Great Depression. Thanks in part to measures designed to stimulate the economy, the decades that followed were marked by tremendous growth and prosperity. Jim Stanford, an economist and director of the Centre for Future Work, believes that we can draw important lessons from post-war reconstruction as we conceptualize a post-COVID economic recovery.

“It was another time when we faced an existential external threat,” explained Stanford. “As a country, we threw everything we could into that battle.”

In addition to investing heavily into the war efforts, Canada also introduced ambitious recovery programs. That period ushered in many of the social welfare provisions and safety nets that we take for granted today: unemployment benefits, health insurance, old-age benefits and family allowances. Along with making sure that families could afford to put food on the table, income supports were intended to help avert a post-war economic slump.

“All that was part of rebuilding the economy after the war – and we entered a period of sustained and unprecedented prosperity for three decades,” said Stanford. “Frankly, the economy has never done better.”

“There’s a similar potential now, but it is going to require a deliberate strategy and public-sector leadership, and lots and lots of money.”

But deficit hawks aren’t wasting time in pushing their austerity agenda and fearmongering over the government’s willingness to spend during the pandemic, noted Stanford. Following the 2020 Speech from the Throne just as the second wave of COVID-19 was starting to take hold, the Conservative leadership was already calling for dramatic reductions in spending and warning that Liberals were going to “bankrupt” the nation.

“The people who wring their hands over debts and deficits were pretty quiet during the first months of [the] pandemic,” remarked Stanford. “It was pretty hard to come out – while Canadians were fearful and grateful to government for trying to protect them – and say: ‘Government is too big.’”

“They shut up for a few months, but they didn’t stay shut up.”

Stanford said those who are bemoaning an impending debt crisis are simply wrong. The country isn’t going to fall apart. The way we discuss deficits – especially in a time of crisis – is what needs to shift.

The Parliamentary Budget Officer has said that the current approach is “sustainable over the long term”. This is especially true if we keep interest rates low, which Stanford reminded us are set here in Canada.

“In a crisis, government has to marshal resources,” explained Stanford. “It’s the only part of our economy that has the authority, the financial capacity and the ability to act on a national scale to actually rescue the country.”

“So, thank goodness we have those deficits because it’s proof that the government did what it was supposed to do.”

Stanford noted that this speedy government response was made possible thanks to public-sector workers. Health care workers put their own safety at risk to care for the sick and beat back the pandemic. Teachers, likewise, quickly retooled to provide online learning. And civil servants rolled out assistance programs in record time. These new supports, including the Canada Emergency Response Benefit, were critical in helping Canadian households stay afloat and in softening the pandemic’s blow to our economy.

That blow hit some harder than others, including low-income and precariously employed workers. This meant that racialized Canadians, who “often have lower incomes and more precarious employment than the White population,” according to Statistics Canada, felt the economic toll most acutely. 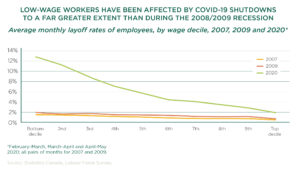 The truth is that Canadians are going to need income supports and government job-creation measures for years to come. The vaccine isn’t a panacea that can magically restore our economy to its former state. As we work towards a healthy economic recovery, efforts to rebuild must be focused on the people who need it most.

“If we don’t help them, we’re going to see such a widening of the chasm of inequality that we already experience in Canada,” Stanford said. “The long-term economic, social, health and political consequences of that will be terrible.”

In addition to planning for the next pandemic, Canada has the opportunity to create a post-COVID New Deal: an ambitious program aimed at supporting the working class, improving health care and promoting greater equity. These could include a number of bold policy initiatives, such as a national child care program, universal pharmacare, fundamental reforms to long-term care, addressing nurse shortages, improving access to mental health services and tackling health disparities and social inequities.

COVID-19 has both amplified and revealed many cracks in our society, which threaten our recovery.

At the time of writing, it’s still unknown whether or not a federal election will be triggered this year. If and when we head to the voting booth, Stanford said, Canadians will have to determine for themselves what matters more: abstract ideas or real supports when they are needed.

“We should ask quite concretely, ‘What matters more to you: having income support when you lose your job because of a pandemic? – having access to first-class quality public health services so you can get the vaccine? – or some abstract idea that we have to keep the debt-to-GDP ratio below 60 per cent?”

If we put it in those terms, Stanford said, we can move the conversation away from ambiguous arguments about the national debt, which are little more than veiled attempts at shrinking the size of the state rather than thoughtful and sound economic reasoning. Now more than ever, we need to focus the conversation on the invaluable role of government in protecting Canadians and helping them get through the pandemic largely unscathed.

Jim Stanford, PhD, is an economist and Director of the Centre for Future Work. One of Canada’s best-known economists, Stanford served for over 20 years as Economist and Director of Policy with the union Unifor. Stanford received a PhD in economics from New York’s New School for Social Research and has a graduate degree in economics from Cambridge University. He is a professor in economics at McMaster University and an honorary professor at the University of Sydney. Stanford has written, edited or co-edited many books, articles and reports, and provided research and advice to governments on economic and social policy, jobs and innovation. He has an ability to communicate economic concepts in an accessible and humorous manner.