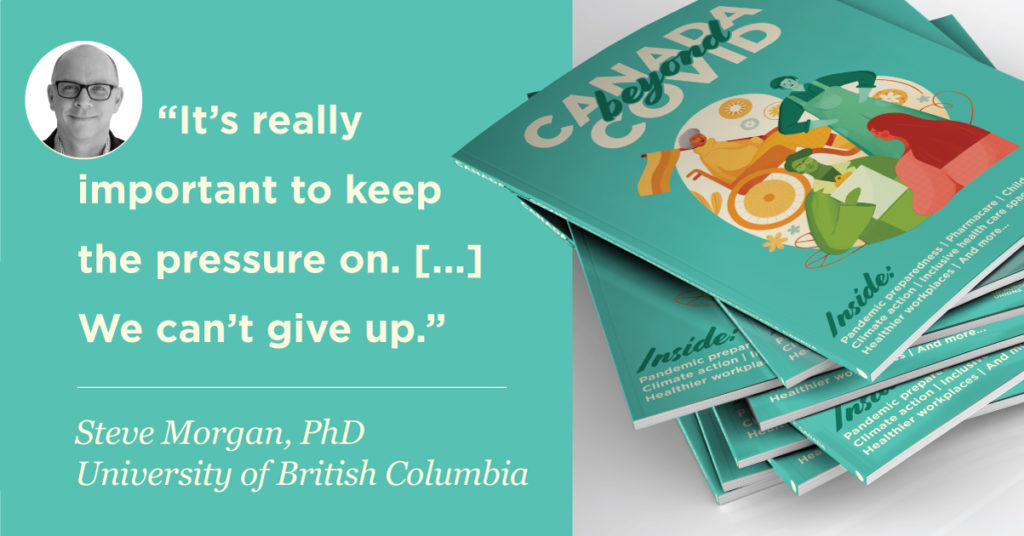 Before COVID-19 crippled the nation, pharmacare seemed within reach. In June 2019, an advisory council recommended the adoption of a universal single-payer public pharmacare system. It was the fifth time a national commission would conclude that prescription drugs ought to be part of our universal health care system.

Just a few months later, an Angus Reid poll found that nine out of ten Canadians also supported the idea, including 76 per cent of Conservative Party supporters. We’ve seen this time and time again: Canadians of all political stripes are united in their support for a national universal public pharmacare program.

But has the current pandemic derailed the decades-long fight for national pharmacare?

“COVID, no question, has changed the dynamic,” explained Steve Morgan, a professor of health policy at the University of British Columbia and a leading advocate for national pharmacare. “Some of the progress that would have otherwise been made has been stalled.”

Against the backdrop of a global pandemic, there’s no question that the path to pharmacare is a bit more challenging. The expansion of our public system is often pitted against a health care sector already in a funding crisis.

But Morgan contends that the case for pharmacare has never been clearer.

“COVID has created very significant economic impacts on Canadians – it has caused millions of Canadians to lose their jobs. We estimate that about one million Canadian families lost health insurance in the past year because of work-related benefits disappearing with career changes that COVID has forced upon many people.”

“That does increase the need for a safety net that ensures that everyone is covered for the medicine that they need.”

Morgan continues to be optimistic. As he pointed out, the current Liberal government has promised pharmacare again and again: in their platform, in two throne speeches and in mandate letters to the ministers of finance and health.

Despite these commitments, those who care about pharmacare mustn’t get complacent.

It still remains unclear what shape a pharmacare program would take under this government, how it would be implemented and under what timelines.

“It’s really important to keep the pressure on,” cautioned Morgan. “Governments can decide that: ‘Well, we promised to do something, but we now think no one cares – or we now think Canadians have other priorities.’”

It goes without saying that pharmacare would greatly benefit the health of Canadians. Nearly 25 per cent of Canadian households include someone who isn’t taking their medications as prescribed because of cost; out-of-pocket expenses remain significant for many Canadians. Under pharmacare, the government would have the power to drive down Canada’s notoriously high drug prices. That’s because a single-payer system would give the government greater negotiating power with the pharmaceutical companies by concentrating the purchasing power in a single hand.

But lower drug prices are just part of the equation. A conservative estimate by the Parliamentary Budget Office suggests that Canadians could save $4.2 billion annually; other studies estimate that those savings could reach up to $11 billion annually.

So why isn’t there greater political will to get this done? Why isn’t there cross-party support for a program that is not only cost-effective but would also improve the health of Canadians?

“This is a no-brainer,” declared Morgan. “Anyone who would wish to do rational policy in the health care space would have done this years ago.”

In the wake of the 2018 federal budget, which established the Advisory Council on the Implementation of National Pharmacare, pharmaceutical and insurance companies embarked on a lobbying frenzy in Ottawa. These industries (and a handful of billionaires) are the only players who stand to lose from pharmacare. 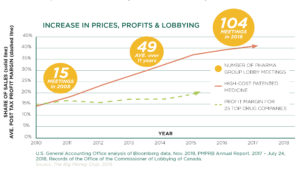 The implementation of national pharmacare is further complicated by the delicate dance between Ottawa and the provinces. Morgan contends that if and when the federal government makes its move, the focus should immediately turn to the provinces’ bloc of conservative premiers.

“The pressure on the provinces is going to be very critical,” he emphasized. “It’s really important for health professionals, for the labour movement, for academic experts, for ordinary citizens just to get out there and remind their MP and provincial politicians that this remains a policy priority.”

Morgan noted that nurses’ voices are especially powerful, since they can speak to the direct impacts on their patients. Nurses know firsthand what happens when patients with chronic conditions can’t afford their medications.

“Nurses are incredible voices in the health care system – and this is first and foremost a health care issue.”

Morgan is counting on those voices to drive the project across the finish line. After more than two decades working on pharmacare, he believes that real change is within reach.

“We can’t give up. We’ve got to consider this last phase of getting this program actually implemented as the most important and re-double our efforts.”

Steve Morgan, PhD, is a professor of health policy at the University of British Columbia. An economist by training, Morgan’s research focuses on policies to provide universal access to appropriately prescribed, affordably priced and equitably financed prescription drugs. He has published over 150 peer-reviewed research papers, received more than $4 million in peer-reviewed research grants, and provided policy advice to governments in Canada and around the world. Morgan has won many awards for his work, including a 2019 Emmett Hall Laureate for his career-long contributions to health system equity, fairness, justice and efficiency.