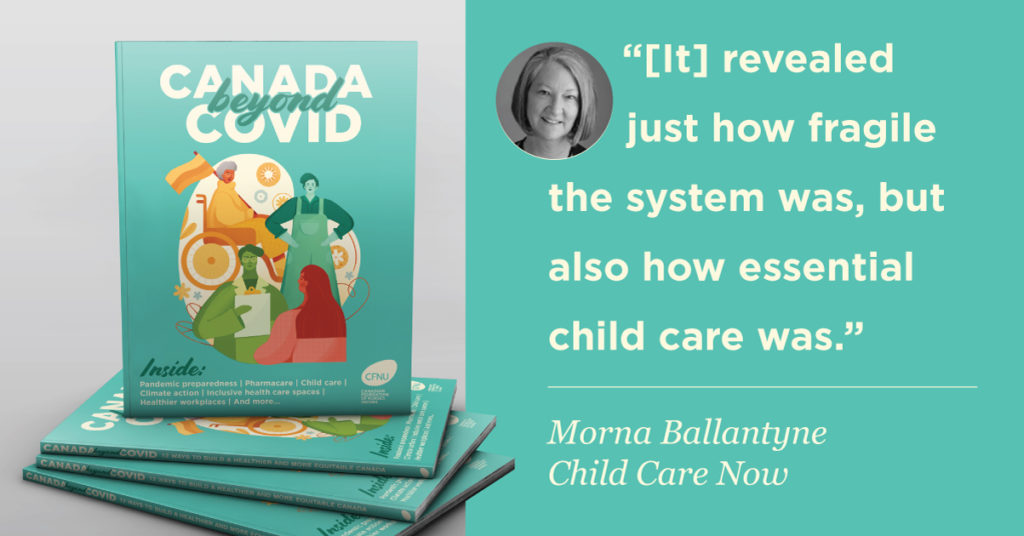 At the center of the 2021 federal budget was a $30 billion promise to create a Canada-wide child care system. The timing wasn’t coincidental – a universal program is desperately needed to get parents, particularly women, back into the paid labour force and ensure that decades’ worth of progress on gender equity isn’t undone by the pandemic.

“The pandemic […] has caused the federal government to realize that this is an area of economic and social policy that needs urgent attention,” said Morna Ballantyne, executive director of Child Care Now. Key to our economic recovery, she said, is eliminating barriers that push women out of the paid labour force.

According to a recent RBC study, almost half a million women who lost their jobs at the start of the pandemic still had not returned to work as of January 2021. Racialized women and newcomers were among the hardest hit. The data also revealed that mothers faced higher job losses than women without children.

Ballantyne explained that many child care centres had to shut down when COVID-19 first hit. Without sufficient public funding to reopen in a safe way, many were forced to slash enrollment. Since most of their funding comes from parent fees, and fewer children means less operating revenue, early learning and child care centres quickly ran into financial trouble.

A loss of licensed spaces in Canada would be devastating. Even pre-pandemic, an untold number of parents had difficulty in finding quality child care.

“The pandemic revealed just how fragile the system was, but also how essential child care was,” remarked Ballantyne. “So essential that governments in almost all jurisdictions took measures to reopen child care for essential workers, including frontline health care workers [and] nurses.”

“It was clear that without child care, parents, particularly mothers, were not going to be able to work.” 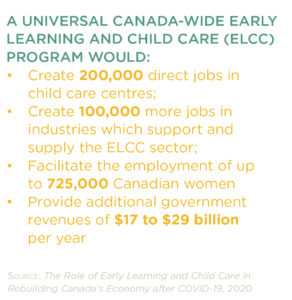 The Atlantic Provinces stepped up and provided direct public funding to support child care centres during the pandemic. Quebec too, long-held as the model for a Canada-wide child care program, fared much better since it was already providing direct funding.

However, Ballantyne pointed out that Quebec actually has two systems: one that directly funds licensed child care centers and home daycares, where parents can access care at a subsidized rate of $8.50 a day; and another that provides tax credits to parents who place their children in the care of private, nonsubsidized centers and home daycares, with fees in line with the rest of Canada.

The latter, Ballantyne said, is an incredibly inefficient way of funding child care.

“It doesn’t help, of course, with making sure fees are low. [The] quality of care in that sector [isn’t] as high as the child care sector that receives direct funding.”

“So, the big lesson from Quebec, and a big lesson for the federal government, is that governments have to step up and directly fund [child care] services as they do hospital services and public education.”

According to a study by Pierre Fortin, an economics professor at the University of Quebec at Montreal, the percentage of women with preschool-aged children, who participated in the paid labour force, rose by 16 per cent in the decade that followed Quebec’s introduction of the low-fee program.

Fortin’s research also found that Quebec’s program pays for itself, in part because having more workers participating in the paid labour force means the province can collect more in tax revenues. Looking at data from 2008, he estimated that the program generated an additional $919 million in tax revenue.

That bridge is also crucial to women’s financial independence, as the high cost of child care can leave many women economically dependent on others, such as parents, a spouse or even other government programs.

These days, most people understand the economic benefits of child care, Ballantyne said. But as we move towards building a Canada-wide child care program, we need to ensure that the economic argument isn’t the sole driving force.

“You need good child care, first and foremost, because of the kids – because kids need places that are safe and equipped for the healthy development of children.”

Ballantyne also emphasized that a particular focus must be placed on equitable access. The current system can be incredibly difficult to navigate. Parents trying to determine what subsidies they might qualify for face an onerous task. This effort requires a great deal of time, something many working parents don’t have in abundance. Low-income workers, often racialized people, new immigrants and Indigenous people can be shut out of the system not only by the exorbitant cost but by the complexity of the current patchwork of child care services.

A universal child care system would go a long way towards tackling those inequities, Ballantyne said.

“We have a saying: programs for the poor make poor programs. That’s why we’ve been insistent that [child care] be universal – that we not see child care as a welfare program [that would] lead to segregation based on race and economic status.”

According to Ballantyne, Canada’s current child care capacity only covers 30 per cent of children aged five and under. It’s going to take a long time and significant investments to build the system Canadians need. She hopes to see the necessary funding for a high-quality universal program – one that is truly inclusive, with appropriate facilities and staff who are both well trained and well paid.

“It’s not enough to build a system. The system has to be designed in such a way that equity remains a key objective.”

Morna Ballantyne is the Executive Director of Child Care Now, Canada’s national child care advocacy organization. A tireless advocate for high-quality and affordable licensed child care for over 30 years, she continues to work with all levels of government to build a publicly managed and publicly funded child care system for the benefit of children, parents and those who work in child care – a system that will contribute to Canada’s economic security and growth. Morna serves on the federal government’s Expert Panel on Early Learning and Child Care Data and Research, and was recently appointed to serve on the Government of Canada’s Task Force on Women in the Economy.