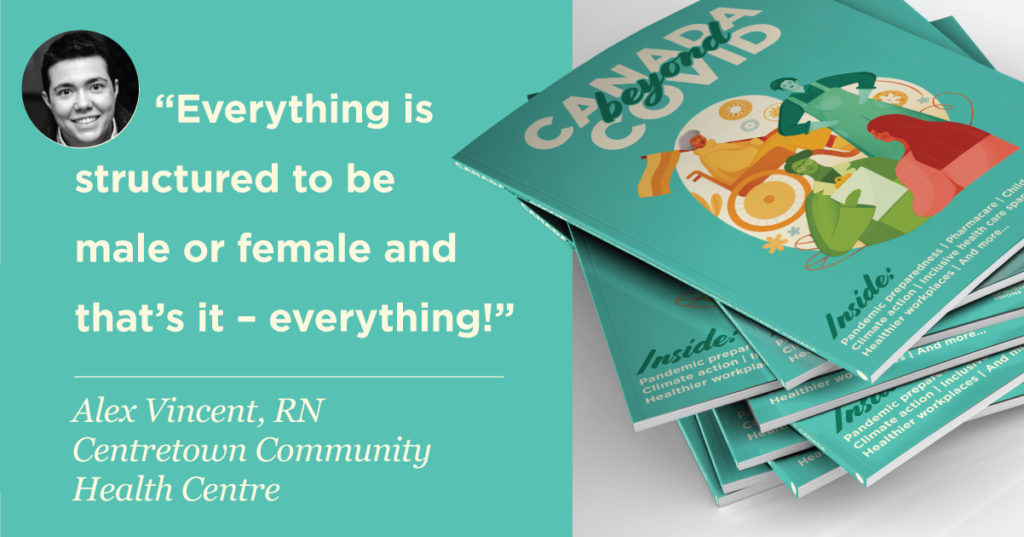 For many of us, the pandemic has been a strange interlude. We’re in stasis – waiting for the pandemic to ebb so we can resume living our best lives. But for many in the transgender, Two-Spirit and non-binary community, that wait is twofold; for them, the pandemic also represents a barrier to a number of vital health care services they need to live as their authentic selves.

“It’s a waiting game for something that’s so important to you in order to be yourself and live your life like everybody else,” said Alex Vincent, a registered nurse and the trans health program lead at the Centretown Community Health Centre in Ottawa.

When COVID-19 hit, Vincent’s clinic quickly shifted to virtual services to provide their patients with the same access to care. But operating rooms and other services became harder to access. Gender-affirming surgeries and treatments were cancelled or postponed. Wait lists for hormone replacement therapy grew; in Ottawa, the wait list is currently nine months. Access to electrolysis treatments for the removal of facial hair has also been severely limited, given the current restrictions and masking requirements.

Because Canada’s health care system pre-pandemic was already stretched thin, hospitals moved to postpone elective surgeries to increase capacity. But labelling gender affirm-ing surgeries as “elective” minimizes their importance. For the trans, Two-Spirit and non-binary people who need these procedures as part of their transition, they’re life-saving surgeries.

“Having to live with these body parts that are very much incongruent with how your mind sees your body is very, very difficult,” said Vincent. Living with gender dysphoria, he explained, means living with discomfort, psychological distress and unhappiness.

This underscores just how vital it is for trans, Two-Spirit and non-binary people to be able to access quality care in settings that allow them to feel heard, supported and validated. But quality care like this is hard to come by in a health care system where staff often lack knowledge about the community and where a binary notion of gender seems to permeate every facet of care.

For Vincent, it was this experience with the health care system during his transition that led him to become a registered nurse.

“I had a lot of trouble going through my transition,” recalled Vincent. At the time, services were limited and few surgeries were covered by his province’s health care plan. During his transition, he didn’t encounter a single trans person working in health care.

Vincent’s advocacy for trans, Two-Spirit and non-binary patients started the moment he entered nursing school. He conducted research in this area during his undergrad and raised trans issues in class.

“[In nursing school,] there was no education about this – or very little,” Vincent recalled. “I made a point to […] bring these topics to the table so that my classmates were aware that trans folks exist and non-binary folks exist.”

But it’s not just about better education. Vincent said health care is often structured around a binary notion of gender which isn’t conducive to providing culture-humble, trans-affirming health care. Something as simple as a charting system can erase a trans or non-binary person’s identity.

“Everything is structured to be male or female and that’s it – everything!”

“Bloodwork: there’s only two boxes. Wards in a hospital – beds: there’s only two options. There [isn’t] another option. The health care system is just not created in a way to be easily accessible for trans and non-binary folks.”

Having navigated the health care system both as a trans person and as a health care worker, Vincent said he understands how the system itself is partly responsible for trans and gender diverse patients’ negative experiences.

“I remember I had a situation where I was getting a test at a hospital – it was a test for a body part that someone who has an “M” [on their health card] doesn’t normally have in their body. They didn’t know how to code it to go to the lab because it wasn’t an option.”

“It’s just one of those odd things – why does it even matter? It’s a test for this body part. Why is it such a big deal?”

It’s just one example of the pervasiveness of gender markers throughout health care.

As Vincent pointed out, a gender marker doesn’t tell the full story and can often lead to the wrong assumptions about people’s anatomy. Charting systems are also problematic. For example, most don’t have a space to include a trans person’s updated name (which may not match the legal name on their health card) or their preferred pronoun.

When they do find supportive and affirming care, trans people have yet another hurdle to overcome: gaps in provincial and territorial insurance coverage that can leave patients paying out of pocket for crucial medical procedures.

While most provinces cover the cost of some gender-affirming surgeries, certain surgeries are not covered because they are considered cosmetic. And due to a lack of access, trans, Two-Spirit and non-binary folks often have to travel to another province to get surgery, adding to the overall cost.

Recently, the Yukon government made headlines when it significantly expanded its coverage. Experts contend that the territory now has the most comprehensive gender-affirming policy in Canada. Notably, facial feminization surgery and body contouring are among the surgeries covered by the territorial government.

Perhaps most importantly, Yukon’s policy clearly recognizes that “gender-affirming procedures are not cosmetic and are life-saving for transgender people.” The territorial government also underscored that “delaying or denying access to transition-related health care can cause significant harm.”

While such sweeping policy wins take time, Vincent said there is something nurses can start doing right now to make a positive impact: paying attention to the language they use with their patients.

“Often, the problem is that people who aren’t cisgender and heterosexual are erased in the question before the patient even has the chance to answer,” explained Vincent.

“It’s just reformulating a couple of words in your question, and it opens it up.”

Inclusive language isn’t just about being polite; it’s about ensuring the safety and comfort of all patients when they seek care. When health care providers create these safe spaces, it allows patients to be more open and obtain better care.

As allies, nurses should also advocate for their trans patients beyond the exam room, Vincent said. For example, he said nurses should insist that a patient’s updated name and preferred pronouns are used even when they’re out of sight.

“You need to have the same respect in front of the client as you do when they’re not present.”

There’s also knowing what questions are appropriate to ask. If a patient is seeking treatment for something unrelated to their genitals, you probably don’t need to ask, Vincent emphasized.

“If the person is there because they have a broken arm and they happen to be trans, their transition has nothing to do with it.”

Nurses should have some basic knowledge about trans issues, Vincent said. Individually, nurses should seek out information and learn about how they can be stronger allies to this community. They should also press nursing colleges to add these issues to the curricula and licensing exams.

“[We’re talking about] little changes that can make such a large difference to so many people.”

Alex Vincent, RN, graduated from Trent University in 2020 with a Bachelors of Sciences in Nursing. He works at Centretown Community Health Centre in Ottawa as a nurse in the Trans Health Clinic. He is also the Trans Health Program Lead at the centre. Vincent is passionate about trans health care and draws upon his personal and professional experiences to guide him in his work.