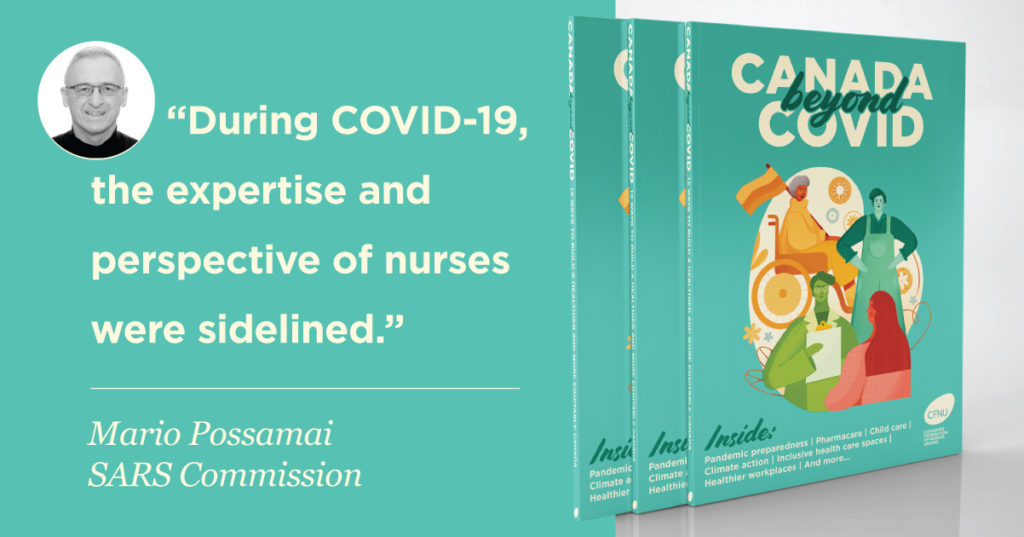 On January 26, 2020, before many of us could even contemplate what COVID-19 had in store for us, Mario Possamai says he received a call from a friend at the U.S. Centers for Disease Control and Prevention.

“I know that Linda Silas and the CFNU provincial leadership made the same request repeatedly,” said Possamai. “But, we weren’t listened to, and it is tragic.”

Failure to follow the precautionary principle meant that, for many months, the government’s advice revolved primarily around the droplet theory: the notion that COVID-19 typically spreads through large droplets (expelled when a person coughs or sneezes) that rapidly fall to the ground.

It would be many months before a scientific consensus emerged and recognized that the virus could be transmitted through aerosols: smaller respiratory droplets that are produced when a person breathes or talks. These aerosols can linger in the air for minutes – even hours. This meant that those working indoors and at close range with infected persons were particularly at risk of inhaling virus-laden particles. Finally, in November 2020, after tens of thousands of health care workers had already contracted COVID-19, the Canadian government quietly acknowledged the potential for aerosol spread.

“One of the tragedies for Canada is that the public health leadership has been on the wrong side of history and on the wrong side of science,” said Possamai. They based their guidelines and their approach on outdated science – on the [large] droplet theory, which is based on 1930s research. And they’ve been closed-minded about airborne transmission and the precautionary principle.”

Most pernicious of all, said Possamai, was that those who called for the precautionary principle were not only dismissed but attacked.

In May 2020, Possamai was quoted alongside Ontario Nurses’ Association President Vicki McKenna in a Toronto Star article in which they advocated for a precautionary approach and a wider use of N95 respirators. Days later, the Toronto Star published a scathing response from a group of infectious disease specialists.

“They accused us of throwing gasoline to the fire,” recalled an exasperated Possamai. “It was so personal. And so lacking in empathy and openness.”

The authors not only maintained that COVID-19 was “almost exclusively spread via droplets”, they suggested that Possamai and McKenna had been promoting “unfounded conspiracy theories”. They called the original article “irresponsible and a serious risk to public health”.

This behaviour, Possamai explained, was emblematic of what he calls the “medical orthodoxy”: the experts simply couldn’t fathom the idea that they might be wrong. This attitude also severely impeded the adoption of a precautionary approach.

Meanwhile, our counterparts in nations that also had experienced SARS in 2003 were quick to ramp up protection. For example, when China saw a rapid rise in health care workers’ infections, they recognized that droplet precautions weren’t effective against this new pathogen and quickly moved to airborne precautions.

Possamai points to warnings from Chinese experts, published in The Lancet as early as February 2020, which warned the global medical community to use “aggressive measures (such as N95 masks, goggles and protective gowns)” to protect health care workers “especially in the initial stages where limited information about the transmission and infective potency of the virus is available.”

These early warnings went unheeded – as did similar warnings about asymptomatic transmission.

“The subtext was that our Western experts know better than the Chinese experts,” explained Possamai. “There’s was an element of bigotry and Western exceptionalism – and it really hurt us.”

“At a time when we’re really beginning to look at systemic racism in our society, we also need to look at the systemic racist attitudes that pervade some elements of medicine and public health, where we disregard the expertise of Asians, for example. It’s an ugly part of Western medicine, but we really need to confront it.”

Humility, Possamai contends, is a quality often missing in medicine – and one that the medical community urgently needs to adopt to be better prepared for the next pandemic.

In recent decades, the world has had to grapple with a decades-long HIV epidemic and outbreaks of SARS, MERS, H1N1 and Ebola. Even as we battle COVID-19, experts agree that the next pandemic isn’t too far behind. To be better prepared, Possamai stressed that Canada needs its own federal agency tasked with occupational health and safety – an agency modelled after the National Institute for Occupational Safety and Health in the United States.

“We really need to have our own NIOSH in Canada – we need to have a place where not just infectious disease [experts] and epidemiologists control the agenda, but we bring occupational engineers, occupational hygienists, aerosol experts, health care workers and nurses around the table to deal with issues like how to protect health care workers – how to protect all of us.”

When it comes to protecting workers, Possamai feels that nurses are especially attuned to the precautionary principle. He points to Florence Nightingale, who advocated for a precautionary approach by implementing hand washing and other hygiene practices well before the germ theory of disease was firmly established.

During COVID-19, something similar happened. As nurses saw the evidence of aerosol transmission grow – and as they pleaded for the proper PPE to protect themselves – their concerns were dismissed.

“It breaks my heart to realize the position this put nurses in – who know better – who knew better than the [health] authorities about what was going on and what needed to be done to protect themselves, their patients and their residents.”

“Government and public health leaders had opportunity after opportunity to follow the precautionary principle and change course — but they didn’t. They should be held accountable. The victims of COVID-19 and their families deserve nothing less.”

Mario Possamai served as Senior Advisor to Justice Archie Campbell, who headed Ontario’s SARS Commission into the 2003 Ontario outbreak. Possamai led the Commission’s investigations into health care worker safety issues and pandemic planning. For decades, Possamai has also led investigations into complex money laundering, corruption and fraud in North America, Europe, Africa, Asia and Australia. His work has assisted in the civil recovery of millions of dollars in stolen assets. More recently, Possamai testified as an expert witness before the House of Commons Standing Committee on Health about the health implications of COVID-19, and has served as an occupational health and safety advisor.