Long-Term Care: “We know what needed to be done, we just haven’t done it.”

Home > Canada Beyond COVID Magazine > Long-Term Care: “We know what needed to be done, we just haven’t done it.” 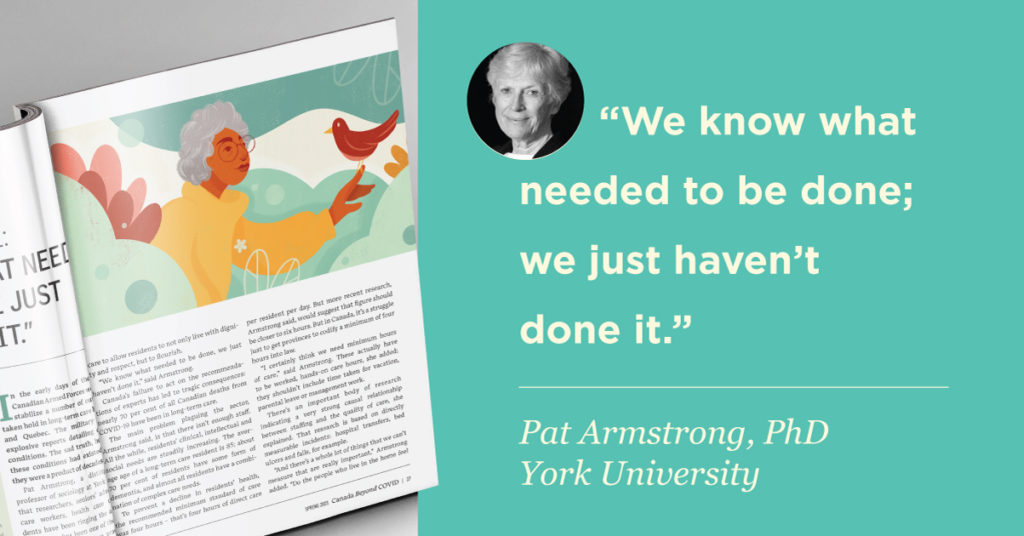 In the early days of the pandemic, the Canadian Armed Forces were called upon to stabilize a number of outbreaks that had taken hold in long-term care homes in Ontario and Quebec. The military later published explosive reports detailing deplorable living conditions. The sad truth, however, was that these conditions had existed for some time; they were a product of decades of willful neglect.

Armstrong has been one of the most prominent critics of long-term care practices in Canada. As the principal investigator for the inter-national project Re-imagining Long-Term Care, she sought to identify how to reform long-term care to allow residents to not only live with dignity and respect, but to flourish.

“We know what needed to be done, we just haven’t done it,” said Armstrong.

Canada’s failure to act on the recommendations of experts has led to tragic consequences: nearly 70 per cent of all Canadian deaths from COVID-19 have been in long-term care.

The main problem plaguing the sector, Armstrong said, is that there isn’t enough staff. All the while, residents’ clinical, intellectual and social needs are steadily increasing. The average age of a long-term care resident is 85; about 70 per cent of residents have some form of dementia, and almost all residents have a combination of complex care needs.

To prevent a decline in residents’ health, the recommended minimum standard of care was four hours – that’s four hours of direct care per resident per day. But more recent research, Armstrong said, would suggest that figure should be closer to six hours. But in Canada, it’s a struggle just to get provinces to codify a minimum of four hours into law.

“I certainly think we need minimum hours of care,” said Armstrong. These actually have to be worked, hands-on care hours, she added; they shouldn’t include time taken for vacation, parental leave or management work.

There’s an important body of research indicating a very strong causal relationship between staffing and the quality of care, she explained. That research is based on directly measurable incidents: hospital transfers, bed ulcers and falls, for example.

“And there’s a whole lot of things that we can’t measure that are really important,” Armstrong added. “Do the people who live in the home feel any joy? Do they take pleasure in life – pleasure we know comes from human exchange, activities with other people, from having relationships?”

During the pandemic, the spotlight was also shone on the working conditions of staff in long-term care. This is profoundly skilled work, that is not appropriately recognized or paid, but in Ontario,

for example, less than half of workers are full-time. Throughout Canada, many long-term care staff work in casual, precarious positions.

Unions have made some progress in obtaining paid sick leave for workers – many of whom are racialized women. The fight continues for decent pay, better benefits and access to full-time work.

“We increasingly are running these places as places where profit can be earned, instead of saying every penny should go for care,” Armstrong remarked. “We are increasingly organizing them as businesses in the larger sense – and not just in the for-profit homes.”

During the pandemic, for-profit homes not only suffered more outbreaks, they also saw more deaths. For example, data from BC collected since March 2020 showed that private for-profit facilities had the most outbreaks. The Toronto Star analysis of long-term care data concluded that “for-profit status has been undeniably associated with worse outcomes throughout Ontario’s COVID-19 pandemic”.

In a model that constantly is looking for efficiencies and cost savings, it’s no surprise that the level of care deteriorates. As a result, the determinants of health – the broad range of personal, social, economic and environmental factors that determine individual and population health – are easily ignored.

“We know how critical food is to care – how critical clothes and laundry are to our sense of dignity of self and care – how important housekeeping is to keeping people healthy in these homes. “We’ve known that we should be changing all of these – or at least focusing on making these much better than they are – and we’ve done very little. The research keeps getting ignored.”

Armstrong pointed out that very few of us want to entertain the idea of getting older, much less the idea that we might ever need to go into long-term care. The Canadian population, meanwhile, is getting older; according to Statistics Canada, a quarter of us could be over 65 by 2030.

“My friends say: ‘I’m never going to go to one of those places!’ Well, virtually nobody plans to go into long-term care – although we should.”

Pat Armstrong, PhD, is a distinguished research professor in sociology at York University and a Fellow of the Royal Society of Canada. She was Principal Investigator of the 10-year study “Re imagining Long-term Residential Care: An International Study of Promising Practices”. Armstrong has published several books focused on social policy, women, work, and the health and social services sector, including books on long-term care. Much of her work centres on the relationship between women’s paid and unpaid work. Armstrong often partners with unions and community organizations in her work. She has also served as an expert witness in more than a dozen cases before tribunals and commissions.