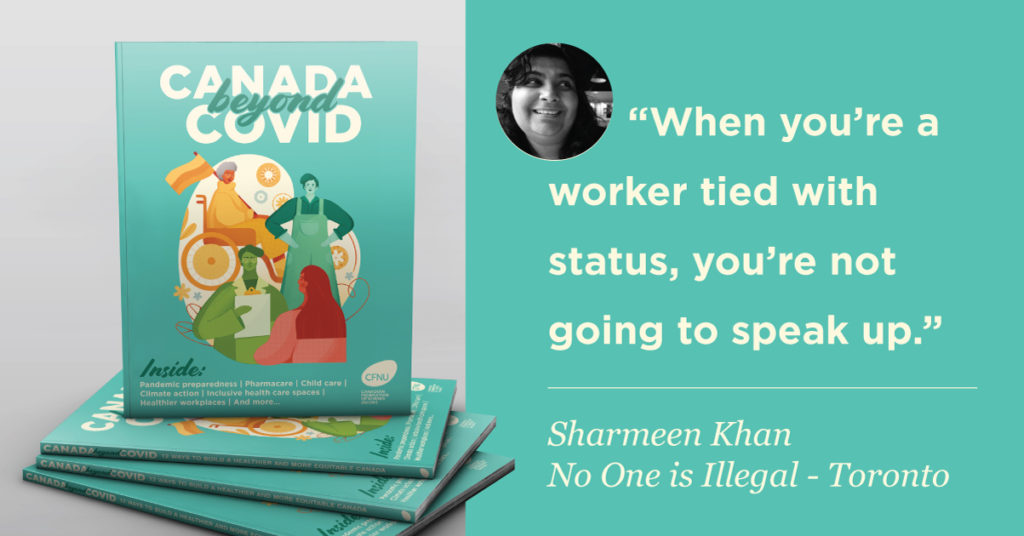 “But temporary workers arrived in Canada after being categorized as ‘low-skill’; they’re seen as expendable.”

Sharmeen Khan has been working with migrants and undocumented people for over ten years as an organizer with No One Is Illegal – Toronto. As the value of essential work has come into sharper focus, she hopes Canadians will also come to recognize that the people working these jobs deserve safety, dignity, rights and care – regardless of their immigration status.

According to Statistics Canada, close to 470,000 temporary foreign worker permits were issued in 2019. Temporary worker categories include seasonal agricultural workers (primarily men from Mexico and the Caribbean who grow our food – often year after year on eight-month visas), low-wage workers making below the average provincial hourly wage (often racialized people working in a wide variety of sectors, including as personal support workers), and family caregivers (mostly women from the Philippines, Indonesia and Latin America who care for children, the elderly and persons with disabilities).

Temporary foreign workers make up almost 3 per cent of total employment and 27 per cent of the agricultural sector. While they are a significant labour force, they lack political power. Many of these workers come to Canada on employer-specific work permits; their ability to stay in Canada, often their housing and their access to health care depend on maintaining a good relationship with their employer. With so much power concentrated in the hands of employers, migrant workers are often susceptible to exploitation.

“When you’re a worker tied with status, you’re not going to speak up.”

As Khan pointed out, migrant workers don’t come to Canada and just work; they build roots here. They make connections – they build a community. But because of employer-specific work permits, migrant workers can’t simply walk away when their employer crosses the line into abuse or unfair labour practices.

“They can’t get another job; they’re just expected to leave,” explained Khan. “This is how many people become undocumented.”

While migrant workers pay taxes and contribute to our social safety nets, they often can’t access benefits. During COVID-19, many had no access to income supports. In essential sectors such as agriculture, migrant workers continued to live and work in close quarters with little access to PPE. And without access to paid sick days, these workers had no option but to carry on working.

“No one is going to miss work if it’s going to be cut from their paycheque,” said Khan. She added that many migrant workers have food and lodging deducted from their pay, so when they take unpaid time off for illness, they can end up owing money to their employer.

Outbreaks peppered the agricultural sector throughout the pandemic. One outbreak at the Ontario Plants Propagation, just outside London, Ontario, is an infuriating example of the flagrant exploitation of migrant workers. According to the Migrant Workers Alliance for Change, the employer had been warned about an incoming shipment from another farm where an outbreak had just sparked over 100 infections.

“All citizens and permanent resident workers at the farm were given the day off when the shipment arrived, but migrant workers were asked to unload and unpack the shipment. Workers simply received an extra $2.00 per hour, $8.00 in total for working with this shipment.”

That incident resulted in at least 20 infections.

These workers had an impossible choice to make: risk contracting COVID-19 or risk getting fired and deported. It’s their precarious immigration status that makes this kind of egregious exploitation possible.

“The solution is permanent resident status on arrival,” said Khan.

“The Canadian value system on immigration is very much based on wealth, income or class,” said Khan. “If you can prove you have this amount of money or can invest this amount of money in a certain Canadian industry, you’ll have an easier time getting permanent resident status. Or if you get a job as a ‘higher-skilled worker’, like engineering, you’ll get PR on arrival.”

Thanks to the work of activists, caregivers are one of the only groups with a direct pathway to permanent resident status. But barriers still exist: they need to be in Canada for at least two years, the application fee is over $1,000, and they need to meet education and language requirements.

At the core of Canada’s immigration policy is a points system that scores potential economic immigrants on a number of factors, such as language skills and education, as well as ‘adaptability criteria’. According to the federal government, the latter is meant to assess ‘an immigrant’s economic and social integration’.

“Implicit in that is social class,” said Khan.

“It’s so inaccessible that the majority of Canadian citizens [if they were to apply for permanent citizenship] would find out they’re not eligible to immigrate to Canada.”

“Definitely, if my parents immigrated now, they wouldn’t be eligible.”

According to Khan, over the last few decades, the number of immigrants who are granted permanent resident status has remained fairly static, while migrants entering the country on a temporary work permit have increased.

“You can see this shift, where Canada wants more precarious workers in, versus people who get permanent status.”

Precarious status can often be the result of our bureaucratic system; many migrants lose their status and become undocumented due to simple mistakes. Others become undocumented when they are forced to leave their job because of an abusive employer. It’s estimated that there are currently between 200,000 and 500,000 undocumented people living in Canada.

“You miss one deadline, and you’re undocumented,” said Khan. “It’s a very scary position to put people in.”

Undocumented people in Canada are forced to the margins of society, Khan explained. The fear of being ripped away from their lives – from their families and communities – constantly hangs over their heads. And as governments began increasingly relying on law enforcement to limit our movements to contain the pandemic, undocumented workers’ fears were magnified.

“It should be easy for our government to put in place a way for those people to get status – and not criminalize them and not punish them. It would be a very doable and easy policy change, but there’s no political will right now for that.”

Meanwhile, our health care system doesn’t always know what to do when an undocumented person shows up looking for care, putting them at further risk. When a patient presents themselves without provincial health insurance, hospitals and walk-in clinics may ask for payment up-front and turn patients away if they’re unable to pay. Few clinics offer free primary care to those without health insurance.

“Our struggle over health care, which came from strong socialist movements, is still a strong basis of Canadian identity and pride,” remarked Khan. “And yet, most people I talk to are shocked [to find out] the amount of people who don’t have access to health care because of status.”

Throughout the pandemic, Canada’s universal health care system was heralded as one of the key reasons we fared so much better than our nearest neighbour. Canadian citizens and permanent residents could readily get tested, receive direct medical care or even spend weeks in an ICU without having to worry about incurring medical bills.

Khan believes it is incumbent upon us to expand our universal health care system so that it truly is universal – to make sure no one falls through the cracks.

“There has to be certain things that we find are a human right and are just provided for. And we don’t attach a status of recognition onto those services.”

Sharmeen Khan began organizing with social movements in Regina, Saskatchewan, in 1994. She currently lives in Toronto, Ontario, where she has been organizing with No One Is Illegal – Toronto for the last ten years. She is also active in other social movements engaged in training and writing. As well, Sharmeen is an editor with Upping the Anti: A Journal of Theory and Action. You can follow her on Twitter: @colonizedmutant.